What an amazing few days it has been. The four of us are really living it up and having fun every moment of every day. Our pace remains relaxed, at around 40 miles per day. Our stops are strategically placed so as to leave us with just one major climb each day, and somehow every day is more incredible than the last!

From Whitefish we rode 43 miles to the Wayfarers State Park in BigFork. The wonderful sisters who just opened the Whitefish Hostel made us delish fresh squeezed orange grapefruit juice and we dillied and dallied for quite a while before riding out. As we got into town before lunch the day before, we were in town almost exactly 24 hours and it really felt like a rest day (we having taken any actual rest days, and likely won’t).

Out of Whitefish was mostly paved rolling hills with beautiful snow capped peaks on either side. A nice guy in a truck who said he was a big cyclist suggested an extra beautiful detour from our route which had slightly less climbing but nicer views… We took it and we’re glad we did other than getting lost for about 20 minutes! Once again John’s GPS saved our skins!

In general not much climbing today, though I was beat by the time we rolled into camp. Like most state parks we’ve stayed in it was a few miles off the main road and climbed steeply up before dropping way down to the lakes edge. Nothing is ever easy! A great swim in the lake and a chat with 4 other divide riders who rolled in around 8 pm. Like most people we’ve met doing 60-80 miles per day, they were jealous of our relaxed pace and ability to just enjoy ourselves!

Day 10 was 38 miles from Bigfork to Cedar Creek campground. We had a nice breakfast out in BigFork before starting out. The first bit was on a very pretty and well used gravel bike path that went all the way to Ferndale along a river. Then began a steep 7 mile climb on loose gravel with lots of fist sized rocks to roll over and big pot holes. I’m getting used to it though, and at this point pavement feels weird and unnatural.

Quick gear review: sunlite panniers were awful on bumpy roads and kept falling off. So glad to have my knew bomb proof Ortliebs! I’m 100% happy with my Surly Ogre, love how it handles even with no suspension. Only thing I would change is getting an odometer with more than one resettable trip distance as it is hard to navigate without resetting the odometer every known map point.

We rolled into camp by 4 pm as usual, bathed in the icy cold Swan River and set up camp. Very primitive camp site and the only out house was falling into its own pit! Icky! There were no bear safe food storage boxes and the trees were not set up well for a bear hang, so we walked our food down to a bridge and hung it right off the side! It worked perfectly but I definitely dreamt of colorful panniers floating down the river!! Between 6 and 9 pm two big groups of rafters beached and took out. The first were younger folks who had been drinking all day and were fairly obnoxious! The second group was after we were all in bed and seemed to think they couldn’t camp there since we were. They shuttled their card further down river and set off after 9 pm for the next river takeout!

On day 11 we rode 43 miles to Holland Lake campground. About a mile out of camp we saw a handwritten note informing us the road ahead was closed due to a washout and even cyclists couldn’t get through. Since the note was dated mid-June we opted to ignore it. We travelled steadily uphill, winding our way higher into the mountains. Each intersection had a more strongly worded road closed ahead sign, which we continued to ignore. Eventually we came upon a giant gaping hole in the road where there once had been a bridge. Some cyclist had spray painted “Jump” on the far bank so we knew it was possible! We unloaded all our gear and took turns carrying gear then bikes down a steep bank of large loose boulders, across a stream, and back up an equally steep bank on the other side. We hung around a while admiring our feat as well as the giant old growth cedar trees which surrounded us.

The remainder of the day was rolling hills on gravel roads in varying conditions. There were a few short sections of single track where grass and bushes had all but taken over the once drivable forest service roads.

By the time we arrived in Holland Lake the campground was officially full but they let us camp for free in the day use area. Before setting up we rode a mile down to the very fancy Holland Lake lodge. They had no openings for smelly cyclists in their busy dinner schedule, so we sat around drinking our new favorite Montana brew, Moose Drool. When we got hungry we biked up to camp and had dinner before returning to the lodge for drinks and dessert. I had a fabulous Oban Scotch and ice cream with homemade chocolate sauce. Nobody can say we’re not doing this the right way!

Today was out 12th day on the trail, and it truly does get better (read steeper and harder) every day. We rode 37 miles to Seeley Lake over Richmond Peak, the coolest trail we’ve ridden yet by far. 9 miles into the climb we stopped suddenly when we saw a grizzly bear lumbering down the road a few hundred feet ahead of us. With bear spray in one hand and camera in the other, we watched it look right at us before turning off the road and into the woods. We waited talking loudly for about 20 minutes to give it time to wander off, and the proceeded with caution!

The road dissipated into tiny trails as we wound our way up Richmond Peak. With amazing vistas at every switchback it was hard not to stop and look constantly. The trail was so rough and narrow at places we only had a few feet of visibility between tree branches. On the steep drop off the peak, tree branches grabbed at our arms and legs on both sides as we tried to maintain a slow speed, hopping over downed trees, large roots, and small boulders. This steep and honestly quite treacherous descent was probably the coolest single spot I’ve ever bicycled! If you have ever watched the Ride the Divide documentary on Netflix, this was the section that was snow covered in the movie where the trail hugged the mountainside, dropping steeply down the side of the mountain. Truly a remarkable trail!

We are now camped behind motel in Seeley Lake, I expect I’ll be online again in Helena, probably on Thursday! Here are a few fun pictures from my phone. 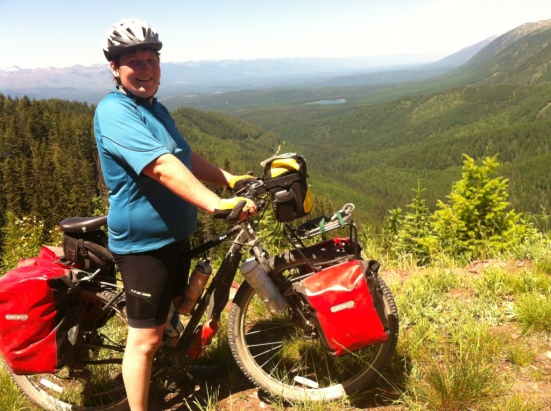 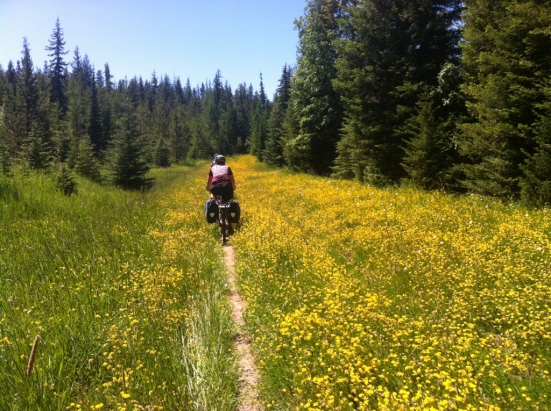 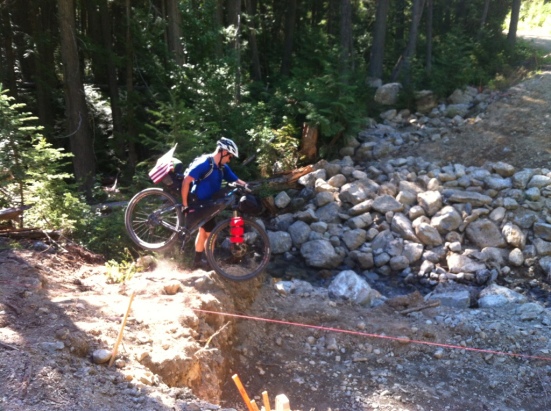 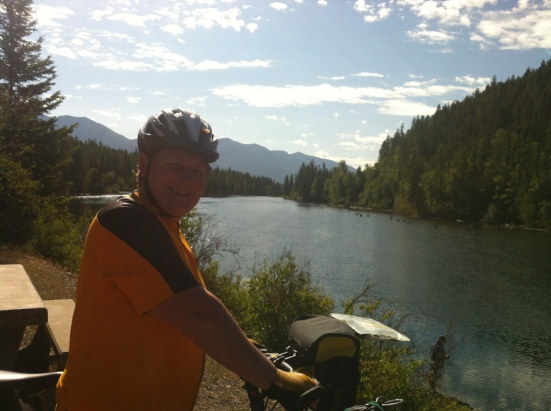 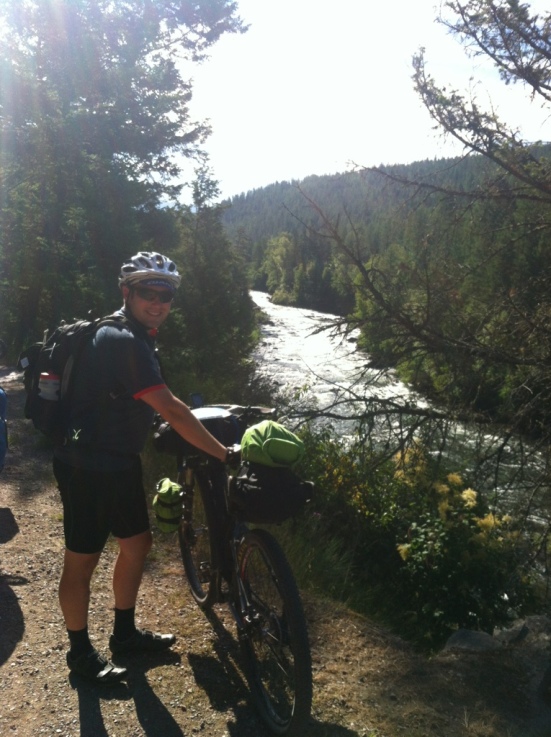 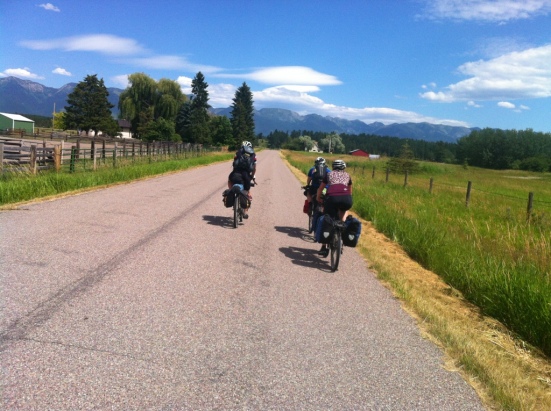