The last two days have been great, though today I am exhausted! After a nice relaxing rest day in Helena, where both my bike and I got some rejuvenation, we decided to take a short day! We had a relaxing and delicious breakfast at the No Sweat Cafe and didn’t get on the road until 1030. During breakfast we chatted with an Australian cyclist doing a long US solo bike tour. He’s been mostly road riding so far and will follow Transam maps (the cross country route Leslie and I rode in 2010) to Colorado and then maybe ride some of the great divide. He’d love to do more gravel, but doesn’t want to be alone on these long remote sections. I don’t blame him!

From town we rode 22 miles (almost entirely uphill) to the Park Lake Campground. The ride was slow but pretty, and I ended with a full days average speed of only 5.7 mph, my lowest yet! The roads we’re mostly in better shape than other days though lots of washboard to contend with. There was quite a bit of traffic so we were a little worried about getting a campsite, but it turned out it was mostly day use boaters on Park Lake, which was a beautiful spot to kayak or canoe!

Leslie and I tested out rehydrating our dinner in a Nalgene bottle and it worked quite well. We are going to try “cooking” our various staple meals in the sun on our racks while we ride this week, and if it works well we will think about sending our stove and cook kit home. While perhaps not as delicious as a stove cooked meal, thus far it’s worked pretty well and would be so nice to lose the weight in our packs!

Knowing we had a big day today we got up and out by 8:30 am, which is pretty good for us! Today is our 19th day on the trail and I think our biggest yet. We rode just over 50 miles and are now camped at a KOA in Butte. The first 6 miles were virtually straight up on a semi-abandoned 4 wheeler track. It was cool and shady but steep and rocky and took 3.5 hours to do 6 miles! John the machine rode the whole thing, but the 3 humans among us walked most of the morning, pushing our bikes up over large rocks and jagged roots. Riding through rocks, roots, sand and gravel defined the rest of our morning.

I had my first (and second!) “Lateral Dismount” today. Sadly, neither one was particularly exciting. the first I was climbing a section I probably should have walked. My front tire bounced sideways off a large boulder which spun the wheel sharply into a deep sand pit slanting down to my right. I ended up on my left side under the bike with nothing to show for it but a muddy shirt. The second was even less spectacular and hardly worth mentioning. I simply did what all cyclists who wear clip-in shoes have done. I was riding along in an open field behind roger and was so distracted by the site of the rugged downhill we were approaching I totally forgot to clip out of my pedal when I stopped behind roger to scan for potential routes down. I landed laughing in the grass!

At one point Roger discovered his camera had fallen out of his pocket so Leslie and I read in the shade while roger and John went back to the last super steep downhill where they found it without too much trouble!

We rolled into the tiny western town of Basin where we realized we’d only done 20 miles and it was already after 2! Roger and John stopped for a quick lunch at the cafe in town and Leslie and I decided to roll on through.

Due to gigantic (and very ugly) strip mines surrounding the northern half of Butte, there are no roads other than the highway! So the second half of our day was on Interstate 15, which actually had a nice shoulder and not too much traffic. We had one small continental divide crossing on the interstate, but I had to laugh because I climbed the pass in one of my mid-range gears and had to actually shift into an easier gear to go down the far side of the pass because the headwinds were so strong.

At one point Leslie and I got off the highway for a quick bite to eat in the shade of a small building. While resting a hiker stopped to say hi who is hiking the Great Divide hiking trail. We had a nice chat with him about the differences between hiking it and biking it! I actually left thinking, I’m so glad I have wheels!

In Butte we loaded up in some food for the coming days, got a bottle of cold white wine, and hit the KOA. We had a lovely evening chatting with the motorcyclist camped next to us who is from Ireland. We shared the wine and a pint of Ben and Jerry’s! A perfect end to a long day.

We’ve heard rumors of parts of the trail being closed just south of here due to flash flooding, and can see and smell the smoke from a large forest fire not far from here, so I have no idea what the coming days will bring!! When I find out, I’ll keep you posted. Here are a few choice photos!

These seed bombs were for sale at the health food store in Helena and made me very happy! 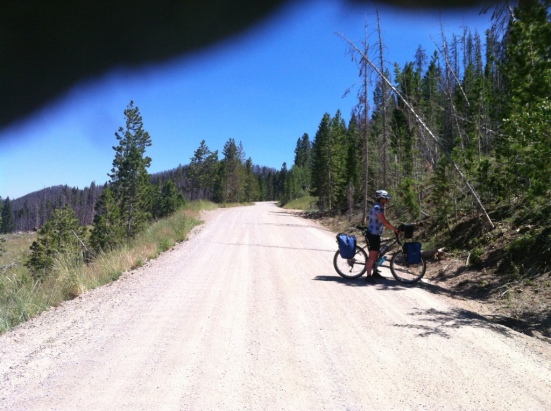 Dinner rehydration test one… Not as bad as it looks I promise. It can only get better from here! 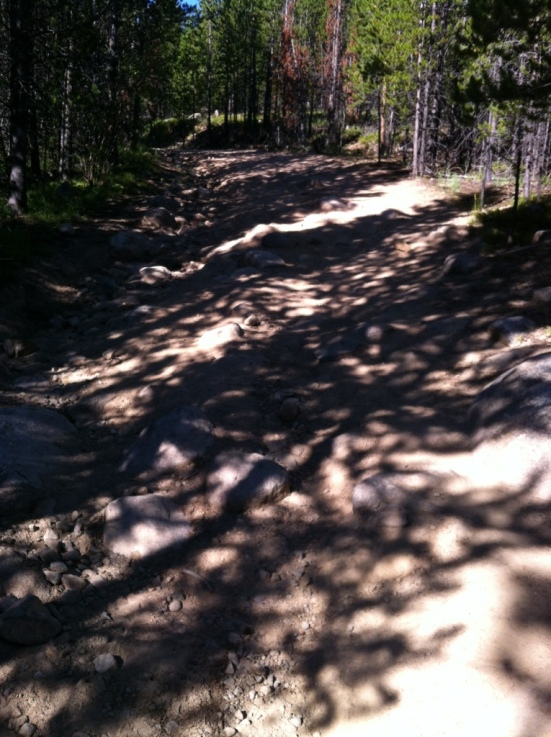 I hope you can see this better than I can on my dirty phone screen, but this was part of our insanely steep rocky climb today.

Roger remounts to try to ride the next section. Off and on the bikes was today’s theme for sure.

Leslie braves a mud puddle of unknown depth. This can only end well!

Tuesday morning update: Flooding was an isolated flash flood taking out the bridge into a campground we aren’t planning to stay at and there is no sign of the forest fire this morning, so we seem to be in the clear for now!!