Last week I had plans with a few friends to head to Mt Washington on Friday to ski Tuckermans’ Ravine, something I’ve never done but have always wanted to do.  As the date grew nearer my anticipation grew as did the frequency with which I was checking the avalanche warnings.  Everything was looking good until mid-day Thursday when they increased the avalanche warnings from Low with simply “general spring hazards” to “Considerate,” defined as “natural avalanches possible, skier triggered avalanches likely.”  I called the ranger station in hopes of getting a clearer definition before deciding whether or not it was a deal breaker.  They gave this analogy:  If you were about to walk into a bar, and someone told you there was a considerate likely-hood that you would be shot, would you still go into the bar?”  While my ski buddy’s response was “depends on what band was playing,”  I opted to play it safe – I didn’t want my first experience on Tuckermans’ to be my last!  Luckily the snow has since firmed up and the warnings have dwindled back to low, so hopefully next Friday we can go!

In the mean-time, with no New Hampshire ski trip to occupy my day off (really my day and a half off – a rarity), I decided I still wanted to get in some spring turns.  I arranged for my friend David to meet me at Sugarbush on Friday, packed my hiking pack with winter camping supplies as well as my ski’s and boots, and drove to Mt Ellen – home of the closed for the season Sugarbush North Ski Area.  I locked my car at the abandoned base area parking lot, which looks even more absurd than normal when it’s void of cars, and began my trek.  I quickly learned that even trails that seem so easy they aren’t anything more than a drag to ski, have a pretty good rate of elevation drop (or gain if you are hiking up them!)

About half an hour into my trek to the summit I came across Aaron, carrying nothing but a snowboard, trudging up the same half snow half grass ski trail as I.  We joined forces and were both glad for the company as we wound our way up the mountain, trying to stick to the not quick as steep slopes.  At one point, as we struggled for traction on the icy slopes of “Elbow” the wind blew us from behind so strong I literally couldn’t stop zig-zagging up the hill! I was just glad it was blowing up the hill and not down! 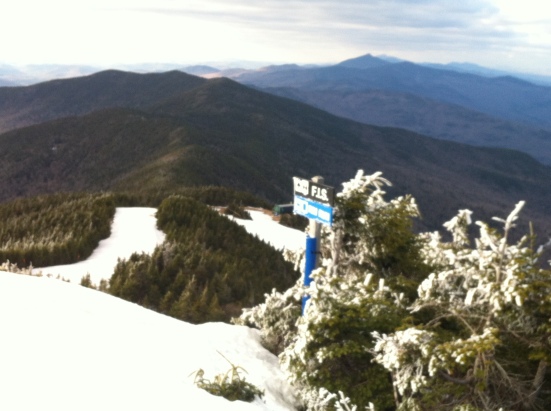 Summit of Lincoln Peak – Elev 3975.  View of the northern green mountains, with Mt. Mansfield in the distance.

We found a sunny spot for a rest and snack just below the base of FIS (one of my favorite trails at Sugarbush North – story goes that F.I.S stands for F**ing Incredibly Steep, and it is).  After a spell we parted ways, Aaron strapped on his snowboard and sailed down out of site as I trudged further towards the 4081 foot peak.  By the time I reached the top my legs were tired and I was ready for a break.  I had hoped to get a run in on FIS, but it was far too windblown and icy to attempt.  Not to mention I was in no mood to re-hike up the mountain!  I found the ski-patrol lodge unlocked as I suspected, and made my self dinner.  Just as the sun was beginning to dip below the Adirondack peaks on the far side of Lake Champlain far below my mountain perch, I began looking for a dip out of the wind big enough for my tent.

I recently purchased a Big Agnes Fly Creek UltraLite 1 person tent.  While I love my MSR Hubba Hubba 2 person tent, it weighs in at just over 4 pounds.  Since much of my camping is in places where 4 nights out of 5 I stay in shelters, but I need to carry something just in case I get to a shelter that is full, I wanted something closer to the 2 pound mark. The UltraLite 1 hits the head on the nail, weighing in at just one pound 12 ounces!  It’s definitely smaller than my lovely Hubba Hubba, but it’s big enough to sit up in and seems like it will work well for it’s intended purpose.

I’d read a weather forecast before heading out that said Mt Ellen would likely have 50 MPH winds, and it wasn’t an exaggeration.  I quickly fell asleep to the sounds of the strong gale blowing through the trees just over my head.  Unfortunately, about four hours later the wind shifted and began blowing directly UP the ski trail and into my tent!  I awoke to the roof touching my sleeping bag and feared a pole would break.  While I was impressed with how the tent held it’s own, I didn’t think I could sleep through such conditions knowing there was an open building just 5o feet away.  So I decided to pack up my sleeping bag and wait for a brief pause between gusts.  When it came I was ready – I threw my backpack out of the tent, and got the tent down in 2 minutes flat.  By the time the wind picked back up, I was packed and being happily blown uphill towards the Ski Patrol Shack where I slept soundly the rest of the night on a very warm, comfortable couch!

I was awake by 7:30 and cooked oatmeal on my Brasslite Ultralight “Turbo IID” Alcohol Stove (only 2.3 oz!) – Can you tell I’m trying to lose weight?  By 830 I was packed up and on the trail, walking on hard packed snow through stunted evergreens along the ridge line.  The Long Trail between Mt Ellen and Lincoln Peak is fairly gradual, slowing gaining and losing bits of elevation as it goes over several smaller peaks, but generally is a gorgeous four mile ridge walk. 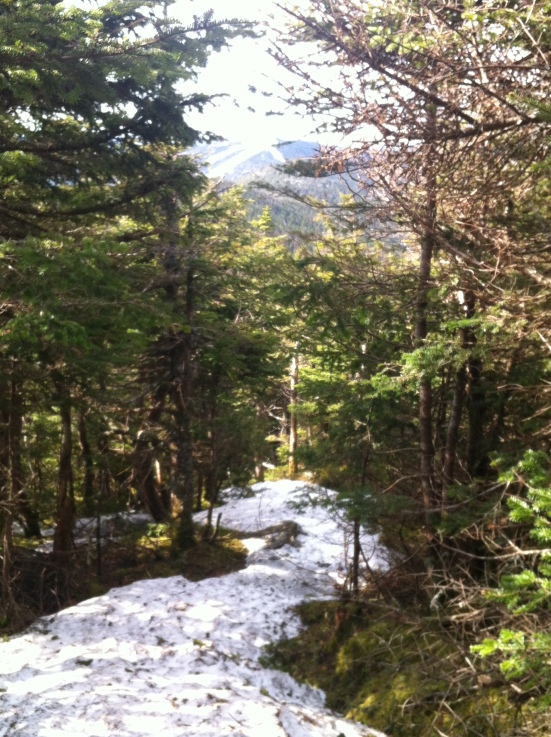 First Glimpse of my final Destination, so close yet so far away! 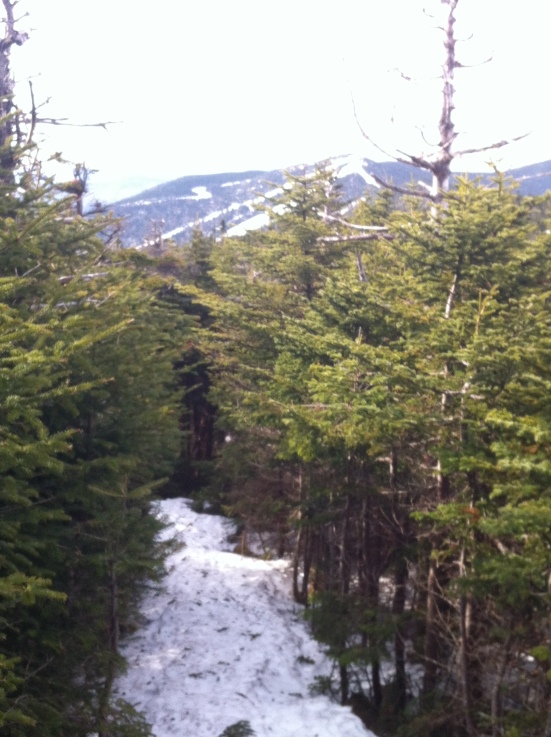 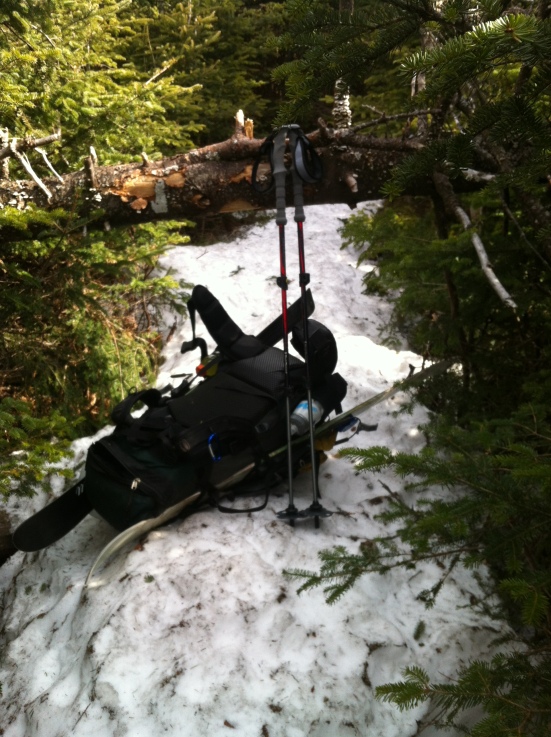 Fallen Trees over the trail prove more complicated with a large pack including long skis!  If I couldn’t go over or around, the pack had to come off to crawl under.

When I popped out onto the snowy ski trail CastleRock Run, I was tempted to put my skis on and head down hill, knowing it would bring me to the base.  But a quick look at the trail below showed it would be a long walk – the snowy section was very short!  So I continued to climb first to Castlerock Peak, then back into the woods towards Lincoln Peak.

10 AM Snack Break at the Summit of Castlerock chairlift- Elev 3812. Sadly not enough snow to ski down from here.

The trail between Castlerock and Lincoln Peaks is used frequently by hardcore skiers who either (a) hike to Castlerock when the lift isn’t running (I’ve only done this once) or (b) hike partway and then ski hard to reach lines somewhere in between the two mountains – Just watch out for the cliffs!  While I haven’t explored these woods extensively, I kept my eyes open for new possibilities for next year.  Sadly the woods were too barren to attempt any wooded descents today. 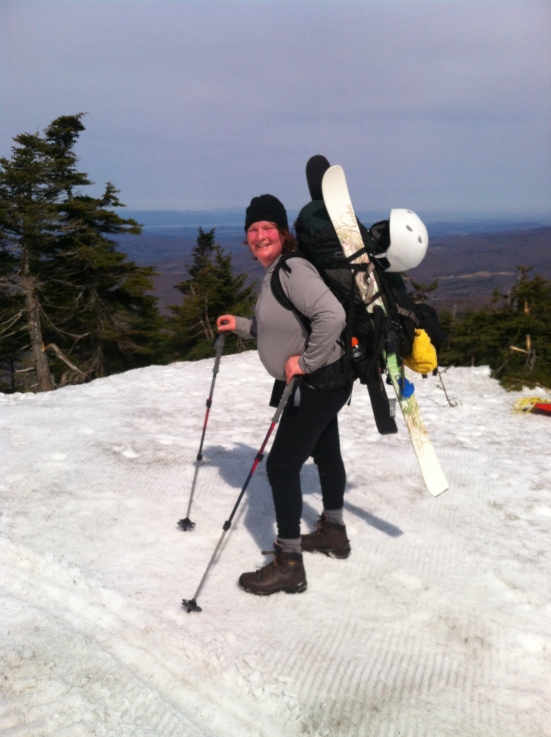 I popped out on a fabulous trail aptly named Paradise, and hiked up over the few remaining moguls to the summit of “Ripcord” the main steep bump run still open at Sugarbush.  Much to the surprise of the ski patrol staff milling about preparing for their day, I arrived at the summit chair’s unloading area just before the first skiers dismounted from the lift. I took a seat, had a snack, and changed into my ski boots before heading to the base to unload my pack.  I got lots of looks from other skiers all the way down, and explained my trip quite a few times to curious onlookers.

After checking my bag at the bag check (too many valuables to just leave out in the locker rooms), I skied laid back runs for a few hours and then met up with David.  We proceeded to pound the moguls almost exclusively on the steep bump run Ripcord, which was in exceptionally great shape.  By 4 PM we were both tired so we retired to the base-lodge for a beer while we changed out of our ski boots.   David shuttled me over to my car and we parted ways after a fabulously fun grand finale to our lift-service ski season.  Though Sugarbush is closed after this weekend, I’m still hoping for some turns on Tuckerman’s Ravine next week!  Friday night, home in my own bed both sun-burnt and sore, I slept like a baby!

4 thoughts on “The Call of the Mountains”